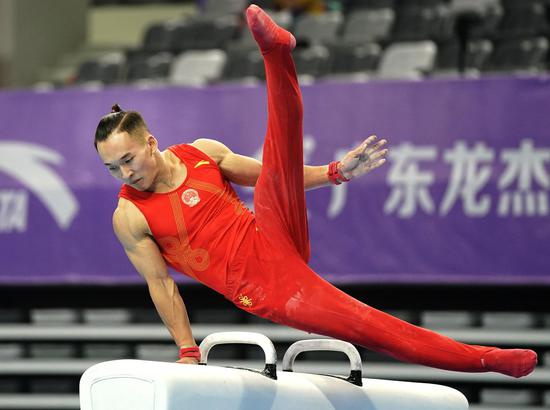 The 2020 National Gymnastics Championships kicked off in Zhaoqing on September 23. In the men’s qualification and team finals, the Jiangsu Men’s Team won the championship. National team key players Xiao Ruoteng, Sun Wei, and Deng Shudi ranked among the top three men's all-arounds in the qualifiers, and individual champions Zou Jingyuan, Liu Yang, and Huang Mingqi also made the finals in their respective strengths.

In the men’s team competition, the Jiangsu team composed of the national team’s main player Sun Wei, Ma Yue, Shi Cong, Weng Hao, Yin Dexing, and You Hao was extremely strong. They won gold with a total score of 334.850. They played in pommel horses, rings, parallel bars, All four individual items on the horizontal bar are ranked first. The runner-up and third runner-up belonged to the Guangdong team and the Guangxi team, respectively, with scores of 327.750 and 322.450.

Judging from the performance of the qualifying games, the key players of the national team have performed steadily, and the players have also shown many new and difficult moves for the development of this winter training. Xiao Ruoteng, who ranked first in all-around with 87.650 points, upgraded the straight-body Kasamatsu 900 with a difficulty of 6.0 in the vault, and got a high score of 15.350. Free exercises have also been upgraded to the degree of difficulty. Last year, the rings that were affected by shoulder injuries have made great progress. Sun Wei, who ranked second with 86.900 points, made a big breakthrough, especially in the weaker free exercises and parallel bars in the past. He surpassed Xiao Ruoteng in free exercise, pommel horse, and horizontal bars in the qualifying competition. With the same score, they just played poorly on the jumping horse and greatly increased their competitiveness in the all-around competition. Veteran Deng Shudi is as steady as ever, ranking third in all-around score of 86.150, ranking first in strengths of free exercises and horizontal bars to advance to the individual finals. Zou Jingyuan showed a set of 7.0 difficulty on the parallel bars and scored 15.900 points. Without any suspense, he advanced to the final as the first in the qualifier, and he also qualified for the final of the ring. Liu Yang ranked first in the ring with 15.200 points and advanced to the final. Huang Mingqi scored an average of 15.125 points in two jumps on the vault, ranking first to advance to the final.

"The purpose of training in the qualifying competition was achieved. New moves were added to the rings, vaulting horse, and parallel bars, and they were successfully completed." Xiao Ruoteng said after the game that although he did not participate in the competition for a long time, he entered the qualifying game relatively quickly. "Before the vaulting, I had some technical problems during training in Beijing. After I came to the competition, the training was unsuccessful. I felt very guilty. But when I stepped onto the stadium, I told myself to be more determined, so I was very happy to complete it successfully."

Lin Chaopan, who ranked fifth in the all-around qualifiers, said that he was slow to enter and he looked forward to a better performance in the finals. "Because of the epidemic, I have not played for a long time. I will be a bit slow to enter the game. It will take a little time. So the qualifying performance is a little worse. Fortunately, the new method of parallel bars has been successful and I have increased a little confidence. The main task is to test new moves." (Reposted from the 03 edition of China Sports Daily on September 25)